Posted on December 11, 2013 by wildgoosepoetryreview

From the September 2013 Art of Poetry Reading. One photo, two poets, two poems.

After he relinquished his keys,
abandoned his practice of driving
by memory, not sight, the Ford
sat parked in the covered carport
for years. The two of them
held court from metal folding chairs
on the front porch, watched
young drivers–weren’t they all young?–
speed past, heading for beer joints
across the line from this dry county.
Sometimes, often, he fell on his way
out to the mailbox, and she flagged
down passersby to help her lift him.
Mostly they simply sat and waited.
For the children to visit, the grand kids,
folks from up at church stopping by.
Sometimes the days moved by so slowly
they could almost see the mimosas
seedlings sprouted in the car bumper
growing an inch or two. 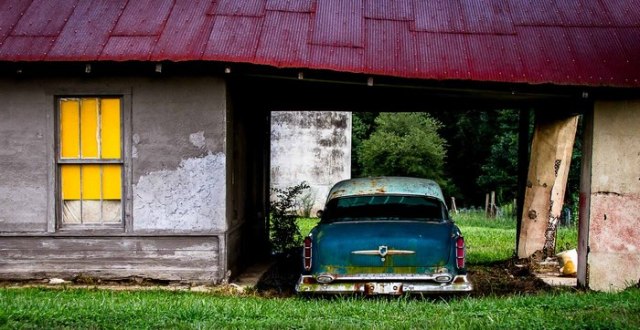 It was “69 when I pulled my old ’56 Dodge in
and parked her for the last time,
her peacock turquoise body still shimmering,
her white roof rustless and gleaming.
Sarah and I had been up to the Amish country
following our roots backward,
holding hands as she slid up to me
in the big front bench seat,
watching the trees popping out
with new spring leaves as we sped along.
One last road trip.

Sarah took sick with cancer
and never did recover.
The next road trip we both took
was in an ebony Chevrolet.
She rode in the far back this time,
eyes blind to the golden autumn leaves
as the hearse slid us slowly
toward Sarah’s eternity.