Scott Owens, “Why Every Road Leads to Nostalgia,” after Clayton Joe Young

Posted on December 30, 2013 by wildgoosepoetryreview

This is not the first time I have collaborated with Clayton Joe Young, Catawba Valley Community College’s wonderful photographer. Years ago I wrote a poem for the annual fundraiser “Aroma of Art” after his photo of an abandoned car. The year after that, I wrote one after his photo of a pelican. Subsequently, I asked him to do photos for the covers of my books, Paternity, Something Knows the Moment, and For One Who Knows How to Own Land. The cover of For One Who Knows How to Own Land became one of the seminal images in our largest collaboration, a book of photos of rural NC accompanied by poems written from the photos. Those photos and poems were bound into a book called Country Roads and have been on exhibit in Alexander, Caldwell, Burke, and Catawba Counties and will hang in Taste Full Beans Coffeehouse throughout the month of January 2014.

Here is our latest collaboration, my poem, his photo, of course, which were part of the museum’s Road Trip exhibit.

Because the sky will always be gray,
and something familiar will stand against it.
Because the flowers will always be the same
as when you rode next to your grandfather
to trade pecans for apples one autumn
day near Cokesbury and the white noise
hum and rhythmic bounce of the truck
let you notice what you’d never seen before
in all the times you’d ridden this way.
Because the path disappearing
between the trees, around the curve,
into the horizon will draw your eye
towards the possibilities of memory
and what you remember of imagination. 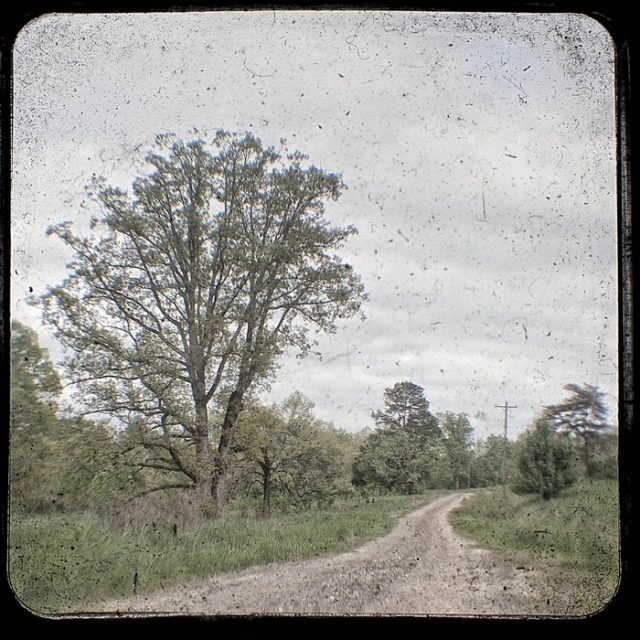